Flaky scales are the most common disorder of the skin. Scales that consist of keratinocytes or horn cells, come lose and fall away during the regeneration cycle of the skin. In skin disorders associated with inflammatory reactions, an increased number of horn cells is generated and consequently accumulates, forming scales. These scales pose an aesthetic problem for patients and may also cause stigmatisation, which is a psychological burden. Furthermore, the scaly patches make it more difficult for active agents to penetrate the skin and should therefore be removed as part of topical treatment.

LOYON® allows a gentle, purely physical removal of scales and crusts of the skin in scaly skin disorders such as psoriasis. The gentle lifting of scales avoids bleeding which can occur as a result of mechanical removal (e.g. scratching). Scale removal makes it easier to apply subsequent topical therapies or is even required to make these possible, as active agents applied to the skin are better absorbed following scale removal. UV-rays also penetrate thick plaques only to a limited extent, hence keratolysis is very frequently carried out prior to phototherapy.

Removal of psoriasis scales also removes active inflammatory mediators, which are bound in the scaly skin layer and further contribute to the inflammatory reaction. Removal of the scaly skin has an important psychological effect and lessens the mental burden. LOYON® can be used in conjunction with systemic psoriasis therapy, especially when plaques remain on the skin despite internal therapy. 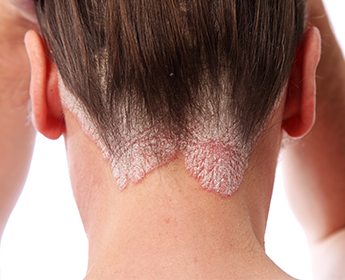 APPLY LOYON® ONTO DRY SKIN AND GENTLY MASSAGE IN.

The liquid consistency of LOYON® makes it easy to spread it on the dry skin, even on very rough scaly areas of the skin. The keratolytic agent is pleasant to apply: it doesn’t sting or stick, is free from odour and colour and leaves a pleasant feeling on the skin.

DEPENDING ON THE LOCATION OF THE SCALES, YOU CAN USE THE PIPETTE OR THE SPRAY NOZZLE TO APPLY THE LIQUID.

With the aid of two application devices LOYON® can be applied very individually. Depending on the part of the body where LOYON® is being applied, the pipette or the spray nozzle can be used. Both can be easily screwed on to the bottle. With the help of the pipette and thanks to the liquid consistency of LOYON® it can be easily applied to hairy areas of the body or onto the scalp. The pipette is also very suited for applying LOYON® specifically to confined or smaller areas of scaly skin. The spray nozzle on the other hand is especially suited for the fast and efficient coverage of larger skin areas.

TO ACHIEVE EFFECT, LEAVE ON FOR 3 HOURS OR LONGER, E.G. OVERNIGHT.

Keep in mind that LOYON® is very efficient and start off using only a small amount. The liquid absorbs quickly and after a few minutes, no residues are noticeable. LOYON® should be left on for around three hours. It can also remain on the skin overnight.

WASH OFF WITH A MILD SHAMPOO OR A GENTLE WASH LOTION.

LOYON® can be applied as often as desired. Even application on large areas of the skin or repeated use, e.g. when scales appear anew during a psoriasis flare-up, is not a problem. LOYON® can also be used by pregnant women, infants with cradle cap or elderly patients with liver or kidney damage. An improvement should be noticed after one week’s daily treatment.