Cradle cap is a skin condition that affects around 10% of babies. It usually appears within the first three months of a newborn’s life. Yellow or red scales and crusts form on the scalp and may spread to the nape of the neck or sometimes even the face. The crusts resemble burnt milk - this is where the term ‘milk scurf’ comes from.

As a general rule, cradle cap is harmless. However, it should be treated, especially when liquid accumulates underneath the scales. This can cause severe itching, often combined with an unpleasant smell.
Treatment will prevent scratching and injuring the skin, which could result in an infection. 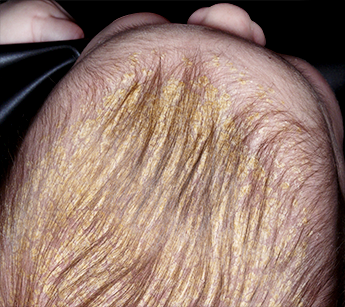 APPLY LOYON ONTO YOUR BABY’S DRY SCALP AND GENTLY MASSAGE IT IN.

LOYON comes in a liquid form, making it easy to spread even on very rough and scaly skin. The liquid is odourless and colourless, doesn’t sting or stick when applied and it leaves a pleasant feeling on the skin.

DEPENDING ON SIZE OF THE AFFECTED AREA, USE THE PIPETTE OR THE SPRAY NOZZLE TO APPLY THE LIQUID.

Both pipette and spray nozzle can be easily screwed onto the bottle and used as needed. The pipette allows you to apply the lotion directly onto smaller areas of scaly skin, while the spray nozzle is designed to cover the entire scalp quickly and efficiently.

LEAVE LOYON ON THE SKIN FOR 3 HOURS OR LONGER, E.G. OVERNIGHT.

LOYON is very efficient, therefore we do advise that you start off by applying only a small amount. The liquid is absorbed very quickly, leaving no residues after only few minutes. For maximum effect, leave LOYON on the skin for at least three hours. You could also apply it before your little one’s bedtime and leave it on overnight.

WASH THE SCALP OFF WITH A MILD BABY SHAMPOO.

You can apply LOYON as often as it is required. Besides being safe to use on infants, It can also be used by pregnant women or elderly patients with kidney or liver damage. After one week of applying LOYON daily, you should see improvements on your baby’s scalp.

1What is cradle cap?
Cradle cap is a skin condition that affects around 10% of babies. It usually appears within the first three months of a newborn’s life. Yellow or red scales and crusts form on the scalp and may spread to the nape of the neck or sometimes even the face. The crusts resemble burnt milk - this is where the term ‘milk scurf’ comes from. In around half of the cases, the condition clears on its own after a while. However, cradle cap can persist for years and may be the first sign of eczema. Strong itching and an unpleasant smell can make this generally harmless condition become a burden. Currently, several causes of cradle cap are being considered. Genetics seems to play a role, but allergies, maternal hormones and yeast infections (most likely Candida albicans or Malassezia furfur) are also considered as triggers.
2How do I treat cradle cap in my child?
Cradle cap is a skin condition which is harmless as such. However, treatment is advisable if severe itching and frequent scratching occur, to prevent injuring the skin and causing inflammation. You can use Loyon to gently lift the scales and prevent complications. The lotion is lightly massaged into the scalp at night and washed off with a mild shampoo the following morning. Use only fragrance- and soap-free skin care products whilst your baby has cradle cap.
3Why do scaly skin disorders such as cradle cap develop?
Scaly skin disorders can have many causes which are not always obvious. Dehydration or lack of oils in the skin may worsen the problem, but genetics are also believed to play a role. Other triggers could be allergies, maternal hormones and yeast infections (Candida albicans or Malassezia furfur).
4How do scales form?
The skin's surface is composed of stem cells (keratinocytes) which divide every 28 days. These cells migrate through the different layers of the epidermis to the surface of the skin. During this process the cells lose their nucleus as well as their cohesion to neighbouring cells. At the end of their journey, these cells are shed off as ‘dead horn cells’ (corneocytes), or scales.
5My baby's scalp looks red after using LOYON. Should I be worried?
You may notice mild redness on your baby’s skin after using LOYON but don’t worry, it should fade soon. This redness isn’t irritation caused by the lotion - it occurs after the scales are removed and new, red skin underneath is exposed. Of course, if your baby seems to be irritated or if you have concerns about the severity of the redness, you should stop using LOYON.